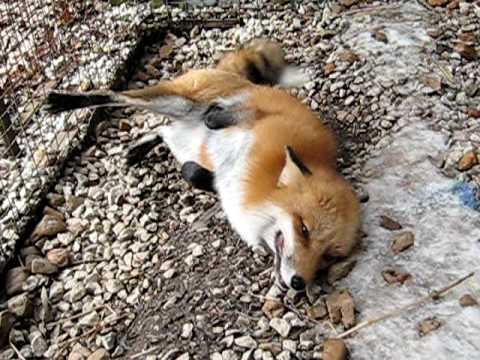 We are deeply saddened to announce that Chuckles, our longtime permanent resident Red Fox, has been diagnosed with terminal kidney failure. She is currently on hospice with staff doing daily checks to ensure she is happy and comfortable. We invite everyone who loves Chuckles to come out and see her out in the fox enclosure as soon as you're able.   If you do visit, please remember despite her appearance, she is not suffering and her care and comfort is our utmost concern.

Chuckles came to TreeHouse as a young fox kit from St. Libory on April 7th, 2007. She had been attacked by a dog and severely injured. Over time, it became apparent that though her physical injuries were healing, she had sustained permanent neurological injuries. One of the ways this was expressed was her trademark "laugh" when excited which she became famous for.

Chuckles quickly became a favorite animal ambassador to the public, not only locally, but all over the world. A youtube video posted by a volunteer in 2010 received over 5 millions hits. People traveled from all over to come see Chuckles. She received care packages with treats and toys from fans. We heard stories about how her videos helped people smile and get through the dark times in their lives. Her impact has not only brought people to love foxes but also raised awareness of the daily struggle that our native wildlife face.

This last year, Chuckles will see off her last batch of five red fox kits. She has been an outstanding foster mom, caring for and teaching our orphaned fox kits and greatly increasing their chances to survive in the wild. When it came to meal times, Chuckles was known for making sure all of the other foxes in the enclosure were fed before she would finally settle down to eat something herself. Since she became an adult in 2008, Chuckles has helped raise approximately 60 orphaned foxes for release back into the wild.

In celebration of Chuckles life and to honor her service in wildlife rehabilitation, we invite visitors to participate in our Chuckles Memorial Fence Project. We will have pieces of raffia ribbon and markers for visitors to write thank yous, prayers, or other comments and tie it to the fence through November of this year. In November, Staff will collect and burn them to release all of the messages. Any donations received will go to help care for future sick, injured, and orphaned foxes. If you would like to make an online donation, a staff member will gladly write a message for you and tie it to the fence.

Please share any photos or stories about Chuckles from your visits to TreeHouse!