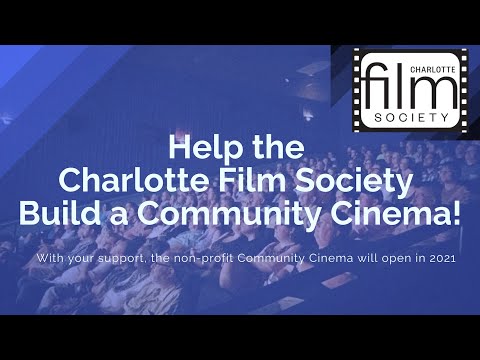 In 1982, the non-profit Charlotte Film Society started bringing foreign and independent films to Charlotte audiences. We have never stopped! But we’ve also never had a home of our own. So we are asking your help to build the Charlotte Film Society Community Cinema. Every donation gets us closer to the goal of opening our cinema in 2021.

During these nearly 4 decades of providing an alternative to the cineplex for Charlotte filmgoers, The Charlotte Film Society has screened films at venues as diverse as C3 Lab, Ayrsley Grand, ImaginOn, The Manor Theatre, Theatre Charlotte, VisArt Video, and the Wells Fargo Auditorium at Knight Theater. With the shutting down of the Manor Theatre in spring 2020, the last of the dependable arthouse venues has left the Queen City.

The Charlotte Film Society plans to make our new home the home for foreign and independent movies in Charlotte.

The Charlotte Film Society is negotiating a lease for our very own 3-screen cinema. In this space, we will

-Show foreign, independent, and other film programming that is otherwise not available in Charlotte

-Act as a hub for film groups and filmmakers throughout the Charlotte area.

-Program films for our audience: YOU!

We think--and we think that you’ll agree!--that the time has come for the Charlotte Film Society to have our own community cinema.

So we’re asking you to help fund this space. Every donation matters to us and helps us get to our goal. Donate and share! We appreciate you, and we know you’ll appreciate our new home.