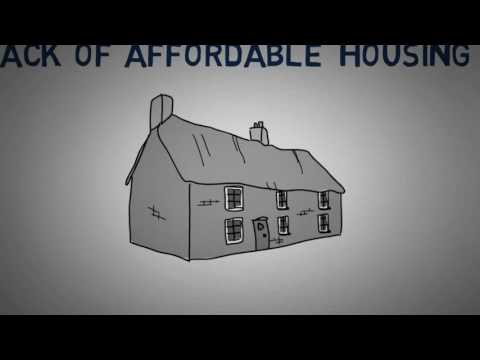 Today, around 2.2million low-income households have vouchers through the federal Housing Choice Voucher program (formerly known as Section 8), which operates as a mobile subsidy where the government covers the difference between the affordable rent for the family and the asking rent in the private market. In theory, vouchers can be used to rent properties in lower poverty neighborhoods, but in practice families face a range of pressures that funnel them into disadvantaged areas. Around 250,000 children in families with vouchers today are being raised in neighborhoods of “extreme poverty” where more than 40 percent of residents are poor.

Poverty is not just an income problem. It is also a wealth problem. All people need opportunities to invest in themselves and in their children in order to move their families forward. Yet, anti-poverty programs in the U.S. have, traditionally, done very little to promote wealth-building among the families they serve.

One such “poverty trap” exists in subsidized housing. Households receiving rental assistance typically pay about 30 percent of their income toward rent -- a policy designed to ensure that assisted households pay a fair, but affordable, share of their income for rent. The unintended consequence of this policy is that it may create a disincentive for families to increase their income, because working more means paying more rent and possibly losing other benefits tied to income, a structure which also makes it more difficult for families to build savings.

BFFCO a nonprofit organization headquartered in Livonia, Michigan has implemented and expanded an innovative, evidence-based model for the program that is helping to show what this program can really do and duplicate it nationally.

And so, in late 2008, Building Families First Community Organization became the first non-profit organization in the country to launch a new asset building and financial capability model for the FSS program.

Shirl Bridgforth is a single mother of two teenage children. She works full time, and, until recently, had been receiving housing assistance through her local public housing authority for several years. Like many families in the subsidized housing and welfare systems, Shirl was getting by -- but she very much wanted to get ahead and build a better life for herself and her children. Shirl dream had always been to own her own home. But she believed that owning a home was not, in her words, “for families like mine” -- that is, a single, low-income mother who lived in subsidized housing, and grew up in a family where no one had ever been a homeowner.

There are so many families like Shirl’s in Michigan and across the country who have similar hopes and dreams for the future -- whether that be to own a home, to invest in their own education or that of a child, to save for retirement, to start a small business, or another goal. While our subsidized housing system provides a crucial safety net for many families, there is more we can do to leverage this assistance as a platform for economic mobility. For many families in the subsidized housing and welfare systems, rules actually discourage and penalize savings, creating traps that make it more difficult for families to reach these goals and lift themselves out of poverty.

In 1990, Congress introduced the FSS program to address this disincentive, with the aim of better promoting employment and savings among households receiving federal housing assistance. As families work more and earn more money, the FSS program allows them to capture the increased portion of their rent payment in a savings account, held in escrow by the housing authority. The program essentially converts increased monthly rent payments into a monthly savings deposit.

There is no other anti-poverty program like it in the country, one that provides a built-in savings account to participating families. It is the federal government’s largest asset building program for low-income families. And yet, despite its potential to help lift families out of poverty, it has been underutilized around the country. Only 71,000 families participate each year, even though an estimated two million families are eligible. The reasons for this are varied. Resource strapped housing authorities struggle to market the program and HUD provides limited dollars for program staff. But, most importantly, housing authorities lack the resources and expertise to unpack the program’s true wealth building potential.

While HUD frames the FSS program primarily as an employment and savings program, BFFCO hypothesized that a wealth building model could drive stronger results for families and expand the program’s scope and impact around the country.

The “Path to Prosperity” model incorporates, client-driven financial coaching and steps to enhance career opportunities, along with the strategic use of the FSS escrow account, to advance household economic mobility. Instead of a more traditional case management or referral model, Building Families First Community Organization’s highly trained Mobility Coaches work with subsidized housing residents, like Shirl, to set and reach their self-sufficiency goals, participate in homebuyer classes, build credit, pay down debt, access high quality educational and employability services, and build savings in the program that can then be used toward those financial goals, all while living in a home they will purchase within 4 years.

In 2010, Shirl enrolled in a FSS program operated through a partnership between her housing authority and Building Families First Community Organization. Over the course of five years in the program, she paid down her debt, increased her annual income by nearly $8,000, improved her credit score by more than 140 points, and built over $3,000 in savings. Shirl graduated from the Keys to Transformation program in 2015 and achieved her dream of becoming a homeowner -- the first in her family ever to do so.

In 2015, the Board of Directors decided to add housing as a platform to our core supportive service program by leveraging housing and housing assistance as a platform for economic mobility through the federal government’s largest, and least well known, asset building program for low-income families.

In fact, participation in a BFFCO’s Keys to Transformation pilot was associated with:

· 5 homes were completely renovated in this pilot totaling approximately $399,442

What the success of the BFFCO’s Keys to Transformation pilot,  using the “Path to Prosperity” model ultimately points to is the key role that housing coupled with financial security  -- in the form of savings and assets -- plays in breaking the intergenerational cycle of poverty, by supporting families to increase their wealth over time and across generations. The changes that Shirl made to her income, debt, and credit, when combined with the savings she built in the program, put her in a more secure financial situation and positioned her to reach a major financial milestone, a homeowner.

Early data suggests that a model like this also has a strong return on investment. Again, Shirl’s story provides a compelling example. Before joining the FSS program, she was receiving a monthly housing subsidy of $625. Today, the housing authority is able to redeploy that subsidy to serve another family in need, and Shirl is now contributing to the local tax base as a homeowner. And although it is harder to measure, we also know that Shirl is now teaching and inspiring others around her – her children, extended family, and neighbors -- to manage their finances and save for the future.