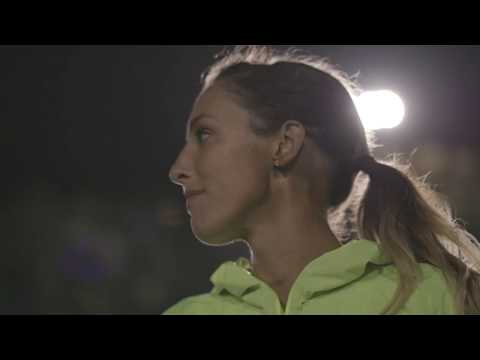 She won a single track & field state title in the 800-meters competing for Perham High School. Gabriele walked-on to the University of Minnesota cross country and track & field teams in 2004, where she was a part of several Big Ten Championship squads and eventually became an NCAA track & field All-American with a runner-up finish in the 1500-meters in 2010, her final collegiate race. Her career highlights include a 4th-place finish in the 2012 USA Olympic Trials and a USA Championship title in the indoor 3000-meters in 2014. Her personal best in the 1500-meters is 4:01.48, making her the 11th fastest performer in USA history.

Gabriele survived multiple bouts with cancer. Initially diagnosed with a rare salivary gland cancer, adenoid cystic carcinoma, in 2009, and thyroid cancer in 2010. She experienced recurrences of adenoid cystic carcinoma in 2016 and 2017. "Brave Like Gabe” started as a hashtag of support and the foundation was formed in 2018 as a way for Gabriele to continue to share her story, connect with patients, and make a difference in the cancer community. She experienced firsthand the many challenges faced by rare cancer patients and the need for dedicated research funding. Gabriele also credited running and physical activity during all phases of her survivorship for helping her get through her cancer journey. She was passionate about sharing that experience with others in similar situations. The mission of the Brave Like Gabe Foundation is to support rare cancer research and empower cancer survivors through physical activity.

Gabriele had every intention of returning to elite competition and ultimately had her sights set on the 2020 Olympics in Tokyo. “I’m open to miracles. I’m open to the possibility. If I get a chance to run, I’ll 100 percent take it.”

Gabriele ran professionally for Brooks from 2010 until her death in 2019.

“Let me be clear, Gabe did not lose. And cancer did not win. Cancer  had to come back four times to get Gabe. That’s not winning. That’s one  for four. She whooped cancer’s ass three times.” -Ben Blair, Photographer

Run MDI is pleased to support the Brave Like Gabe Foundation.