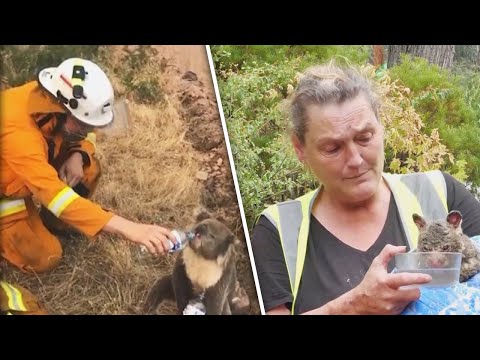 Australia has been burning out of control with 1000's of fires and the rains over the past 5 days have brought much relief. The fires have killed over a billion animals.

The wildfires have turned southeast Australia into a charred, apocalyptic nightmare and threaten to wipe out entire species of animals.

1000's of lives, homes and farms are gone and the humans have suffered greatly too.

Third Wave have been helping the animal rescue shelters and also the fire victims as well.

My brother Geoff is a preacher in a church on the south coast of Australia and has been helping comfort local farmers who have lost everything in nthe fire.

A few days ago he told me about the Moore Brothers family.  Tom Moore is an elder who attends his aboriginal gathering.

Not long ago Uncle Moore received the highest honor from Queen Elizabeth the 2nd and Aussie Govt in the Order of Australia for running indiginous projects. My brother meets with him regularly. The farm was granted to them from the Govt to be a cultural center. The aboriginal world is a full of complex stories and Geoff  deeply vouches for them. My brother Geoff is a solid man of his word.

Please donate towards their cause- why ? because we are all one human race and just a small leg up helps.

Their story is below.

"It is with a heavy heart and complete sadness that I announce that Richard, myself and our family have lost everything on our family farm due to the ongoing bushfires here on the South Coast of Australia. My husband Richard Scott-Moore (Goombine) from the Yuin Nation and his family are the Traditional Land Owners of a piece of land roughly 1,100 acres in size. The land is home to many sacred sites and was home to my husband’s ancestors who lived, prayed, hunted, gathered and danced.

The land is also home to an abundance of wildlife including kangaroos, wallabies, wombats, goannas, snakes, possums, deer and so many species of birds. Because this land is a sacred place, the family devoted their energy to protecting it from over development thus ensuring the continued prosperity of the natural ecosystems which supported all forms of wildlife.

The farm was used to provide cultural activities and resources to schools, community groups and organizations in and around Australia. It was a gathering place to bring family together for celebrations and unity.

So many memories and good times were shared by hundreds of visitors to the farm. The family lost everything in the fire. At the farm the following buildings have been destroyed:-

The cabins that slept 160 people-

The dining hall which sat 300 people-

The house- The tool shed and all its belongings -

The meeting rooms- The gymnasium -

On top of that we’ve also lost multiple farm vehicles and machinery. The tires literally melted off the tractors. An estimated cost of $2,100,000.00 is needed to replace what once was.

Hopefully through this fundraiser it will help offset some of the costs and lift the stress from the family. Funds raised from this campaign will go towards reestablishing the farm as a cultural gathering place. Email Money Transfers can also be sent to: candace.richard2020@gmail.comThank you to all of you who have reached out to offer support. Your kindness and generosity have lifted our spirits. In kindness,

UPDATE: Another area we will help is the ·Wild2Free kangaroo sanctuary in Runnyford, NSW

Our partners at ROWW from USA have successfuly helped rebuild 7 kangaroo shelters at Free2ride animal sanctuary which was burned down on new years. There is a long road ahead and I know Rae Harvey the owner would appreciate your donation.

·  Only 22 kangaroos have returned, many suffering from burns and dehydration

Australia is burning out of control with over 1000 fires and there is no end in sight. It has killed over a billion animals.

The wildfires have turned southeast Australia into a charred, apocalyptic nightmare and threaten to wipe out entire species of animals.

* An estimated billion mammals, birds and reptiles have been killed sinnce the bushfires started in September, according to ecologists from the University of Sydney. The actual number is likely much higher.

Third Wave Volunteers Australia are activating to help humans and we are concentrating on a number of trusted groups who are helping rescue and care for the charred animals.

Wildfires have turned southeast Australia into a charred, apocalyptic nightmare as the country copes with a devastating fire season that is expected to grow worse with the summer months.

1000's of homes are gone along with nine million acres of land and 18 people killed. The blazes, expected to be the worst over the next days and threaten to erase entire species in Australia.

One of the groups we are helping are the Port Macquarie Koala Hospital. Initially, the Koala hospitals aim was to raise money to purchase and distribute 12 automatic drinking stations to areas that had been burnt in the horrific bush fires in eastern Australia (in NSW). The drinking stations are placed in areas to help koala and wildlife survival.

The number of drinking stations has now grown to over 100 and are being shared with other wildlife orgs in fire affected regions in areas of NSW.

The fundraiser enabled the Koala hospital to purchace a vehicle to tow a trailer with a large 1000 litre water tank to refill the drinking stations with water as needed. The goal is to have 30 drinking more  stations built and deployed in the next week.

Donations will be directed to the wildlife water drinking stations.

Below our recent work in the Bahamas disaster.