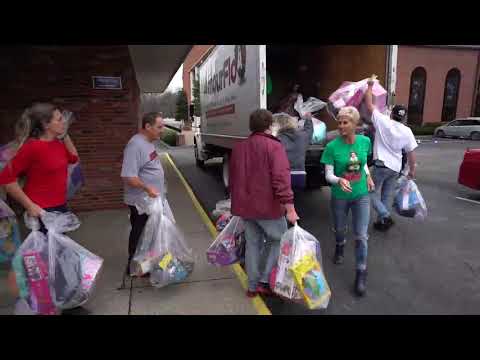 The Salvation Army Angel Tree was founded in 1979 by Majors Charles and Shirley White when they worked with a Lynchburg, Virginia shopping mall to provide clothing and toys for children at Christmas.

This year, the Salvation Army will have over one million angels across the United Sates. In our local community, there are on average more than 7,000 angels who need adoption to help them and their families celebrate Christmas.

In 2016, Frankie started his first Angel Tree Adoption campaign after seeing a social media post promoting the Angels. He became inspired to do what he could and adopt as many angels as possible. He started a GoFundMe and in just 10 days, was able to raise over $4,000 and adopt 45 angels. Overwhelmed by everyone’s generosity, it drove him to work harder and to make it even more of a success. Fast forward to 2017 and he set a goal to raise $15,000 to be able and adopt 150 angels. Letters were mailed requesting donations and to his surprise one of the families challenged him to raise $15k! If this was accomplished, he and his wife would match the donation allowing the adoption of twice as many angels. Frankie was able to raise $17,500 and received the matching $15,000 gift for a total of $32,500 allowing him and his team to adopt 325 angels.

Due to the success of the first two years, Frankie decided he wanted to do more. This led to the creation of Frankie’s Family, established in 2018. Frankie’s Family mission is to help those families in need through out the year, through a variety of community involvement projects, inspired from our beginnings with the Angel Tree Adoption.

2019 was our biggest year to date! Frankie’s Family was able to raise $45,000 through various fundraising and donation efforts. Yet again, for the third year in a row we had an amazing donor who agreed to match what we were able to fundraise. We set out to fundraise $22,500. Our gracious donor matched our $22,500 allowing us to adopt 450 angels. Thru various team efforts and some long nights shopping, we ensured those families had the most magical Christmas Morning!

This is not possible without the support of great people like you, donating, helping with shopping, and even something as simple as sharing our mission. Thank you for all of your continued support and here’s to a recording breaking 2020!