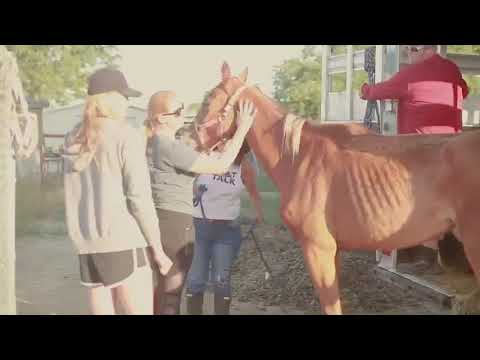 All Seated in a Barn FUNDS NEEDED FOR LARGE RESCUE

The weekend of June 6/7 2020, anyone tuning into the Bowie Auction Horses Facebook Page watched on live stream and saw something no one had ever witnessed.  A girl from Bakersfield, California outbidding the kill buyers and horse traders, saving 59 horses and donkeys one by one. Her bidder card number, 4656, rang out throughout the auction house on repeat while everyyone in the room watched in disbelief. Who was she? Was she a kill pen buyer? Horse trader?What did she want with all these animals? Those were the questions filling the comment section of the live stream and we, ASIAB and our amazing supporters, were there to answer..  she is All Seated in a Barn!

Once people realized what she was doing, the comments turned into a hundred supporters who had her back while the kill pen buyers and horse flippers made comments and heckled from across the room. The 59 are now SAFE, and it is time to bring them HOME, to ASIAB, in Bakersfield, California.

Please take a moment to read about how we got started, two years ago, and watch the video about who we are, and some of the photos of the horses and donkkeys saved this past weekend.

We HAVE to do right by them now and give them the care that they deserve, but we need your help to do it!

Our story begins with a donkey, friendship, family and passion. Who would have thought that wine and the Bachelorette would lead to something so life changing on so many levels?

…..  It started when I was little. I remember the first animal I ever rescued, a beautiful Monarch butterfly. I was about 4 years old and remember finding it lying behind some empty black plastic planters my mom had stacked off to the side of the driveway. The butterfly was just sitting there, its wings opening and closing slowly. I remember reaching down and letting him climb onto my fingers. He just sat there, opening and closing his wings slowly. He was beautiful and the first butterfly I had ever touched, none the less, he was alive. It was magical. What I remember feeling was that I wanted to make sure he was okay, that nothing could hurt him and that I needed to help make sure he was safe from birds and the dogs we had, that ran around the back yard.

I immediately cupped him to my chest and ran to the kitchen where my mom was, excited to show her what I had found. My mom, being the amazing human being she is, immediately grabbed some honey and filled the lid of an empty jar, filled a little container of water and made sure to let me know how important it was that I didn't touch his wings or he wouldn't be able to fly. We then took him to my room, where we placed him gently into an open glass cabinet, and filled it with flowers and leaves and of course the honey and water. To this day, I don’t know if the butterfly was a male or female, but I always referred to him as a male, it was just a feeling.

Honey, water and fresh flowers became my daily routine. After a couple of days I noticed him finally flying in the cabinet so I got him out, and placed him gently onto my shoulder. He needed to go outside so he could fly and my shoulder was the best place to start for that. So off we went, to the backyard. I remember being scared he was going to fly away and I would never see him again, but I also knew it was the right thing to do. That is where he belonged. The funny thing was, he didn’t leave my shoulder. I walked all over the backyard, picking flowers for him, all the while he just casually opened and closed his wings on my shoulder. I remember letting him walk onto my finger and I would place him on a flower so he could eat, me very intently watching his long tongue uncurl and curl back up, uncurl and curl back up. It made me proud to know he was happy and he was okay.

One day I will never forget was the day I had him inside on my shoulder as I was just walking around the house, and he took flight. He flew off my shoulder and was flying all over the living room, landing on various things, taking flight again, flying around, and then he, as if knew, flew right back over and landed on my head. For me, it was the coolest thing to ever happen, EVER.    The butterfly stayed alive for weeks, never flying away, and always by my side. He eventually died, and although I cried and was upset, I also knew that I helped him. It makes me choked up even writing this. It impacted me knowing I helped him and it never stopped after that.

Kevin the Donkey | the inspiration behind it all

Fast forward 35 years and you have a picture of a donkey, the cutest donkey I had ever seen, sitting on a kill pen lot, with an ID tag on his butt. I had nothing more to go off of, other than the look in his eyes, and the position of his ears. He was nervous, he was confused and he was adorable.  My sister was the one who found him. She happened to follow a model who had reposted in her Instagram story about a donkey needing help, a donkey that was being shipped to slaughter in the morning if no one stepped in and helped him. I knew NOTHING about donkeys and I expressed this to my sister over a glass of wine. WHAT would I do with a donkey?

Another glass of wine later and the donkey still remained unsaved. Donations were not coming in and no one was stepping forward. My heart was beating faster. Could I actually afford a donkey? Again, WHAT would I do with a donkey? A few more commercial breaks and episodes of Chris Harrison passing out the rose, another bottle of wine opened, and it was time that I save the donkey. What was I going to do with the donkey? I didn’t know, but I knew it was time I do it. He needed me and unbeknownst to me, I needed him even more, we all did.

I sent the bail money in and a few days later I sent the shipping in as well, to get him to Bakersfield.  It took him about a month to get to me due to various delays, but the moment I saw him I cried and wrapped my arms around his neck (again, I am crying even typing this out). He was the cutest thing I had ever seen and he was safe. The stupid red line on his neck, denoting he was chipped for transport to the Mexican boarded, was getting scrubbed off. He wasn’t a number anymore, he wasn’t a statistic, he was Kevin the donkey and he was mine.

Every day he became a little more outgoing, a little more receptive to the onslaught of love that was pouring over him by everyone who met him.  I will never forget my grandpa, in his wheelchair, eager to meet ‘this donkey’, and the huge smile on his face. He had a love for donkeys since being enlisted to fight in WW2, and he specifically had two donkeys assigned to him to carry supplies. For him it was a proud moment. He laughed, he patted his head, and Kevin did it again, he changed a life and brought someone else to tears of happiness.  Who knew? I didn’t. I didn’t know this donkey was going to start having this effect on people. I didn’t know this donkey was going to change people’s lives JUST in meeting them. He just kept doing it. People would meet him and laugh, and cry and tell stories of donkeys they had met and take pictures with him. He was this ball of happiness that no one knew they needed, but we all did. We all needed Kevin for various reasons.

THE BEGINNING OF ASIAB:

It was a couple weeks after I got him, when a friend of mine came out to meet Kevin that the idea of ASIAB got started. We all got to talking about horses and donkeys and slaughter and how we wished we could rescue more. About how I had always wanted to have a non-profit that brought the community together, and that maybe, just maybe, we could all work together to make it happen.        …..

Here the second part of the story begins, at one of our favorite local restaurants, Sonder. We ordered some wine and appetizers and started figuring out HOW to make this a reality. How to actually turn the idea of a non-profit into a real life saving, community helping thing. None of us had ever done it before, or even had a clue. To this day I still don’t know what I am doing, but we are doing it. We are making it happen and we are saving lives and making a difference.

All Seated in a Barn is personally, my heart and soul. It is where and what I was meant to do. It is the hardest thing I have ever done, and I am grateful for life and God and friends and family for even getting it to where it is today, two years in. To be honest, I never even for one moment imagined how hard it would be and how much it expects from you as a person. The funny thing is, it isn’t running the non-profit that is hard. It is hard because of how much you care. Hard because of the backlash you get in making the best decision you can and it not being good enough, hard because you lose animals you fight for and inevitably, someone still is blames it on you, hard because the world isn’t nice and when you CARE about the animals and the people who are helping you, even the ones who are against you, it hurts you, because you CARE.

ASAIB is not just a rescue. We are a family of misfits, brought together by a donkey named Kevin, put together to make a difference, joined together as a team to fight for them, and tied together, through our hearts and tears, which want to help and save the ones who need it most, both human and animal.  We make mistakes, we are not perfect, we all struggle and fight our own personal demons and battles, but at the center of all of that, we all just want to help make a difference.


Posted by All Seated In A Barn

All Seated In A Barn

All Seated In A Barn