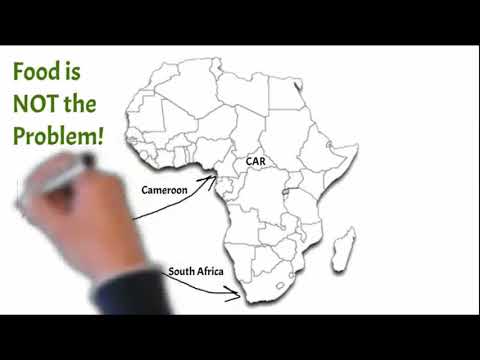 Raised by 14 people in 8 months

Break a siege endangering 900,000 people.  The food is available... Transportation is needed.

Together we can save lives.

I have been associated with Aegis Trust (www.aegistrust.org) since I visited the Kigali Genocide Memorial in Rwanda in June 2019. Their stated mission is “Aegis works to prevent genocide and mass atrocities worldwide”. I have been working with them on Peace and Humanity Education. My objective is to bring the lessons learned through Rwanda’s post-genocide reconciliation to the United States to heal the deep divisions we are experiencing in the United States today. If you are interested in learning more about this work please contact me. It is through my association with Aegis that I became aware of this crisis.

Like most people I know, the word CAR makes me think of an automobile, not an impoverished former French colony ranked 188th out of 189 in the 2018 UN Human Development Index.

What is the Central African Republic: France established the current borders in 1894 when it ruled the country as a colony.  After gaining independence in 1960, the Central African Republic was ruled by a series of autocratic leaders, including an abortive attempt at a monarchy.  The first multi-party democratic elections occurred in 1993.  Ange-Félix Patassé became president but was later removed by General François Bozizé in a 2003 coup. The Central African Republic Bush War began in 2004. In spite of peace treaties signed in 2007 and 2011, the civil war resumed in 2012. On 18 February 2014, United Nations Secretary-General Ban Ki-moon called on the UN Security Council to immediately deploy 3,000 troops to the country, bolstering the 6,000 African Union soldiers and 2,000 French troops already in the country, to combat civilians being murdered in large numbers. In March 2015, Samantha Power, the U.S. ambassador to the United Nations, said 417 of the country's 436 mosques had been destroyed, and Muslim women were so scared of going out in public they were giving birth in their homes instead of going to the hospital. Presidential Elections were held in December 2015 and no candidate received more than 50% of the vote. A second election was held on 14 February 2016 where Prime Minister Faustin-Archange Touadéra won with 63% of the vote. President Touadéra was recently re-elected on 27 December 2020. Unsatisfied with the election results, rebels have laid siege to the capital city Bangui with an estimated population of 900,000.  (www.reuters.com/article/us-centralafrica-security/bullets-and-panic-rebels-attack-central-african-republic-capital-idUSKBN29I0ZI?il=0)

Aegis Trust’s Involvement: Aegis has had a team in the Central African Republic for about 6 years. They’ve been working with faith leaders, government leaders, and rebel leaders towards the resolution of hostilities. One of the Aegis team had been in the countryside until after the election was certified, and believing that things had calmed, he moved back to the capital city Bangui. He is reporting the situation from inside Bangui.  https://vimeo.com/503842811/77bbc76baa

A caravan of trucks bringing food from Cameroon was intercepted and the drivers were attacked as a message to other truck drivers. It has worked, there are hundreds of trucks with non-perishables in Cameroon waiting for a change in the stalemate.

There are reports that hunger is driving young people to pick up an AK-47 and join the rebels.

Aegis is keenly aware of the state of perpetual dependence that frequently results from well-meaning food drops. It kills the local food-supply economy. Merchants can no longer sell food in the market if foreign food is available for free at the airport. Small farms might continue to grow crops for their immediate family, but with no markets to sell crops to, there is little incentive to continue growing larger crops. For this reason, Champion Humanity Enterprise -  a social enterprise that supports Aegis - is proposing to “sell” food at pre-siege prices to vendors who agree to resell it in the market at pre-siege prices.

There is food in the pipeline… What is needed is transportation.

I was asked to brainstorm on how Aegis might get the first plane of the ground.

Once a plane is in the air it becomes far easier for others to follow.

A small plane filled with 5 tons of perishable food will cost $25 to fly from South Africa to  Bangui. A larger plane capable of delivering 20 tons would cost $40k.

If even half the funds are crowdsourced, Aegis will be able to leverage those to secure the rest from other donors.

Organizations like Aegis Trust rely heavily on donations and social enterprise.  Due to the global Covid-19 pandemic, income has evaporated while the needs have increased.

I told them I would write a check to get the first plane off the ground if I could, but I too have not worked since March.

The Big Ask: I have created this, my first ever GoFundMe campaign to ask, as somebody put it, “The Friends of The BergerMan” to come to the rescue of 900,000 people they probably didn’t know existed.

I don’t want you to send ME any money. Aegis Trust is a charitable organization based in the UK and Rwanda, but they do have a small presence in the United States called Aegis America Inc. headquartered in Houston, TX. It is a 501(c)(3) organization. EIN: 31-1769192. Donations are tax-deductible. The IRS NTEE classification code is B99, Education N.E.C. within the Educational Institutions and Related Activities category.

Some more links for your personal research:

· An old BBC article about the “Smith Brothers” and their first project. These brothers founded Aegis Trust www.bbc.com/news/uk-england-nottinghamshire-51239945

· Here’s a link to what I am involved with https://www.aegistrust.org/what-we-do/

· Some information on the conflict in Central African Republic (CAR) one of the poorest countries in the world: https://www.cfr.org/global-conflict-tracker/conflict/violence-central-african-republic

The Central African Republic will enter a fifteen-day state of emergency as armed rebels try to blockade the capital of Bangui. Rebel groups have recently increased violence in a bid to oust President Faustin-Archange Touadera, who was reelected in December (Agence France-Presse).January 22, 2021

William Berger aka: The BergerMan

Raised by 14 people in 8 months