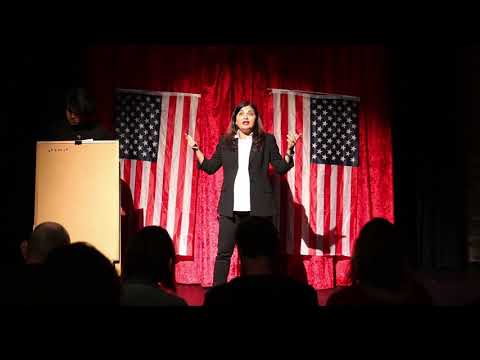 Campaign Update: we reached our initial goal for basic expenses of the production by December 29,  2019, so now we are stretching the goal to cover cast and crew stipends by March 1, 2020. All donations from this point forward go to cast and crew.

Help fund a theatrical tour of the 20/20 play through the San Francisco Public Library system with attendance free and open to the public at the end of February and beginning of March 2020!

($1,022 covers transport, marketing, printing, insurance, and props... i.e., no overhead except the donation transaction fees. A stretch goal of $6,000 more would go directly to cast and crew stipends. Another stretch goal would bring the play to other libraries in the San Francisco Bay Area.)

It’s the year 2020. The President has been re-elected, the climate is heating up, and the economy is in meltdown. Now, it’s up to all of us to figure out what happens next. In this satirical participatory performance, audience members choose from a list of possible scenarios they want staged: impeachment? a coup? a revolution? 20/20 asks what people power looks like in a time of vast uncertainty when even choosing to do nothing at all has its consequences.

Brought to you by the Theatre Makers project, which provides common ground for diverse communities to collaborate on, incubate, and stage both newly created and historically relevant audience-participatory plays based on social, political, economic, and environmental change (SPEEC) themes. Theatre Makers is a project of the 501(c)(3) non-profit organization Ritual Art Troupe. Ritual Art Troupe fosters and develops inclusive, participatory, and community-based arts.